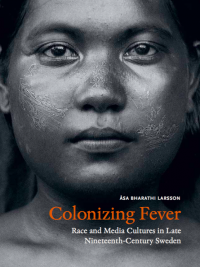 In the late nineteenth century, Swedish media cultures showed a remarkably high amount of representations of the colonial world. Wild West acts promised authentic American Indian performances and a great narrative of the West. The ethnological exhibitions displayed a presumed everyday life culture of Indigenous populations and the wax museums staged colonial events from Congo that the Swedish audience could relate to. The orientalized motifs were immensely popular in the art salons and private art market, and these themes, along with racial comic strips, travel accounts from far o places, race science and colonial advertisements, were frequent subjects in the illustrated press and ephemera. At the same time, the ambitious scientific Vanadis expedition set out to collect ethnographical material to establish an ethnographical museum and to photograph Indigenous populations for the purpose of creating a racial archive.